Posted by scottisafooldev in Amazon Plugin on October 16, 2007

I read a review of my Amazon plugin on a blog, and unfortunately, I never made a note of the blog entry (if you’re reading, leave a comment

), but they suggested that the title of the item should show just that, the title. The way the plugin worked originally was it got the title of the page, and Amazon, being the idiots they are, stuck so much crap in there it often made the title huge, including actors (for films), etc.

So, I have now changed that. The plugin will now only display the title, and only the title.

Posted by scottisafooldev in Amazon Plugin on July 7, 2007

Update: The plugin has been updated on Gallery now. Same place as before.

You might remember when I first released my Amazon plugin that I commented at the end on the fact that Amazon suck. Well, it has been brought to my attention that there was a slight problem with my Amazon plugin, and upon investigation, I found that Amazon not only suck, but are in fact, shit. No, really, they are! Basically, if you go to an Amazon store that isn’t the US one and try and put a product into it that isn’t in the US store, then you basically can’t have an affiliate link for amazon.com, you have to use the domain from which you got the product. So if you got something from amazon.co.uk, then the affiliate link also has to be amazon.co.uk. Do you have any idea how annoying that is!

Anyway, being the good little boy that I am, I have changed the plugin to allow for this. With it comes a new setting in the Options window, and a new textbox in the main plugin window: 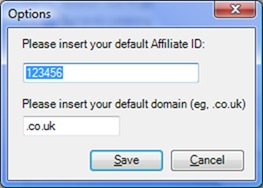 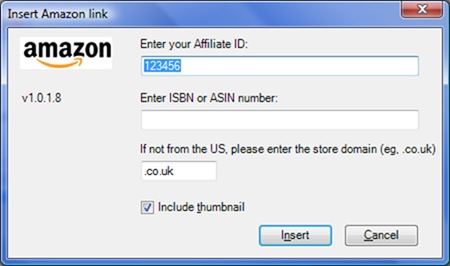 I have put the update on Gallery, just waiting for approval. In the meantime, if you use an ISBN or ASIN number from a store that isn’t the US one, and the US store doesn’t have that product, then it will cause an exception. I will post an update when the new version has been approved.

Posted by scottisafooldev in Amazon Plugin on July 4, 2007

As part of a discussion on the Live Writer MSN Group someone asked about having a plugin to easily insert Amazon products and have a referral link to the product. I pointed out that a plugin already exists that does that kind of thing, but after trying it, they decided it wasn’t quite what they were looking for. So, I created one that did do what he was looking for. The plugin window is basic, you put your Affiliate ID in as well as the ISBN (or ASIN) number of the product, and just select whether you would like a thumbnail of the product to be shown as well:

Now, if you put a lot of Amazon links on your blog, it would get a bit cumbersome to have to keep putting in your Affiliate ID, so if you go to the plugin options, you can set your default ID:

An early version of the plugin allowed you to just put in the link of the product from Amazon, but unfortunately, Amazon suck, and they have a stupid amount of different ways a link can be given and still be valid and take you to the same page, so I dropped that. I might look at adding it again at some point, but for now, no, tough.