Posted by scottisafooldev in Installation on June 13, 2007

As I mentioned in my post for Insert Video Jnr I am now using a different installer method for my plugins. This new deployment method has come about as a new option for Live Writer with beta 2’s release, the full documentation of which can be viewed on MSDN. The method I have adopted is the second one, but what does this actually mean to those who aren’t deploying plugins themselves?

Well, for a start, it means that the plugins from me will no longer be installed into the %ProgramFiles%\Windows Live Writer\Plugins folder as they have done before, they get installed by default to %ProgramFiles\ScottIsAFool\<PluginName>\. Ok so far. Now the trouble is, what happens if you have already installed my Video Plugin, for example? Well, as it stands, using the new installer alone will mean that when you open Writer up, you will end up with two instances of the plugin. I have put some instructions in the installer as prerequisites to installing any of the new plugins. I shall repeat them here:

"Please make sure you remove any previous versions of this plugin. You may need to go to  Add/Remove Programs (XP) or Programs and Features (Vista) in your Control Panel. If you don’t  have anything in there for this plugin, then please go to C:\Program Files\Windows Live  Writer\Plugins (or your equivalent in your language) and delete the plugin dll from there."

Now, some of the older plugins that have recently been updated, like the I’m Feeling Lucky plugin might not have been installed using an installer as there was a time where I gave the plugins simply in a zip file. Well, to counter for this, I have created just a simple little utility that lists the plugins of mine that you currently have installed in your Plugins folder, and lets you select which ones you want to remove (if you’re installing a newer version). The utility itself looks like this: 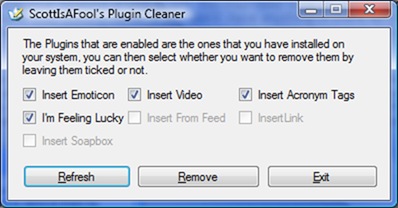 So just select the plugins you want to remove and press Remove. After they have been deleted, if you choose not to close the program, you can press the refresh button and make sure that they have gone. Once all this has been done, then you can install the newer plugin.

The Cleaner can be downloaded from here.